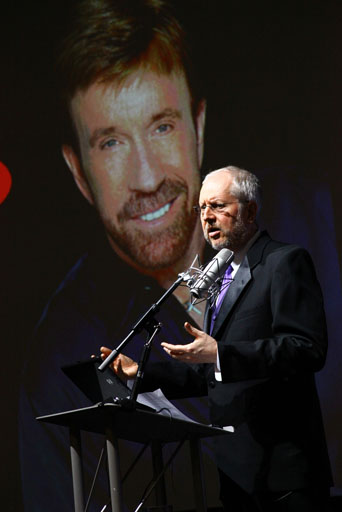 Writer. Lecturer. Programmer. Best All Around.

Douglas Crockford is the author of How JavaScript Works. He has been called a JavaScript Guru, but he is more of a Mahatma. He was born in Frostbite Falls, Minnesota, but left when he was only six months old because it was just too damn cold. He has worked in broadcasting, learning systems, small business systems, office automation, games, interactive music, multimedia, location-based entertainment, social systems, and programming languages. He is the inventor of Tilton, the ugliest programming language that was not specifically designed to be an ugly programming language. He is best known for having discovered that there are good parts in JavaScript. That was the first important discovery of the Twenty First Century. He also discovered the JSON Data Interchange Format, the world’s most loved data format.

I wrote a best selling book, JavaScript: The Good Parts, published by O'Reilly in May, 2008. My series of instructional videos is elevating the art of web development. I am developing platforms for secure programming. I put together an alliance of companies to restore discipline to the process that manages the ECMAScript Programming Language Standard. I have founded an effort to transform JavaScript into a secure language, which is part of my plan to transform the web into a safe platform for mashups, advertising, and commerce.

Faceless was the working title for what might have been my next company. I had been exploring opportunities in software development tools, social networking systems, language systems, games, and medical sensors.

I developed and established an industry standard data interchange format: JSON. JSON has become the preferred way of representing information in network applications. I am an international standards body.

I have been developing a secure programming language. It is similar in expressive power to JavaScript, but with a more robust syntax and much faster virtual machine. It provides security by capability containment.

I had also been doing consulting and research. I have been an expert witness. I have done Due Diligence. One of my clients was a television set manufacturer. I had been collecting and reporting to them on FCC regulations, legislation, court opinions, the Entertainment Business, DRM technology and strategy, remote control, product design, and marketing.

State developed an application framework for highly-interactive web applications. I was one of the two principal architects. I developed the client technology. I met with investors and customers. I conducted training sessions. I led the technical team. I published articles. I filed a patent. I discovered JSON.

The State system was built around highly scalable session server that could support single and multiuser applications and mashups with a convenient programming model. It anticipated Ajax.

Electric Communities (aka Communities.com) was founded to produce a globally scalable, highly distributed software networking platform for online commerce, collaboration, and entertainment. We raised $40M in venture capital. Our team had some of the world's best designers and developers in the areas of distributed systems, security, programming languages, user interface design, and graphics. We developed the Microcosm System, which anticipated Second Life. We acquired OnLive and The Palace, two online entertainment companies. I designed and led the development of the Passport System, which we delivered to Turner Broadcasting as part of their Cartoon Orbit service.

I was one of the founders of the Media Kitchen, Paramount's new media laboratory. I staffed the lab. I supervised the design of our facility in Palo Alto. I consulted with the Theme Parks division, Television division, and Publishing division on interactive technology. I consulted on the Star Trek Location Center project.

I reviewed emerging technology and determined its suitability for entertainment. (Was it was fun enough?) I consulted with Industrial Light and Magic (the special effects division), THX (the high quality presentation division), and the DroidWorks (production tools division). I developed designs for digital entertainment systems with companies such as RCA (Sarnoff Lab), Apple, Texas Instruments, Harris Semiconductor, Computer Cowboys, Fujitsu, NTT, and Philips. I worked with Apple Computer and The National Geographic Society on prototypes that became the basis for "Multimedia". I designed and led the development of a computer-based video editing system. I produced the company's first interactive videodisc, first Nintendo cartridge, first CD-ROM game. I started the company's Location-Based Entertainment project. I consulted on the Lucasfilm's Habitat project, the first large-scale graphical on-line community. I chaired the company's Engineering Council.

I did marketing support, where I saved some key accounts. I developed operating system utilities. I designed and developed the DataWord II Word Processing System. I optimized a compiler. I did research in Office Automation.

I worked on a negative income tax experiment that measured the impact of income maintenance on the stability of families.

My degree was in Radio and Television. I worked my way through school by doing computer consulting for the Mathematics Department and the School of Behavioral and Social Sciences. I started a Masters program in Educational Technology.